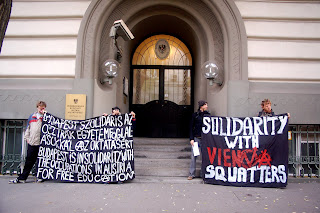 On november 17 a group of 10 activists and students came to the Austrian embassy to express their support to and solidarity with Austrian students and squatters.
The demonstration started at 10-20 a.m. after majority of people gathered on the opposite side of the street.

First, we tried to ring the bell of the embassy, so that someone will go outside and take the support letters addressed at the Austrian ambassador in Hungary. Unfortunately, these tries had no result, as nobody came out. Then we started the demonstration itself. We wanted to put the transparencies and banners on the windows of the embassy, but as the embassy building belongs to Austria, and not Hungary, we could not do that. Instead, we were just holding the transparencies and standing in front of embassy.

At 10-35 the official part started. I held a speech about the reasons for us to gather in the morning in front of the Austrian embassy instead of doing other things. 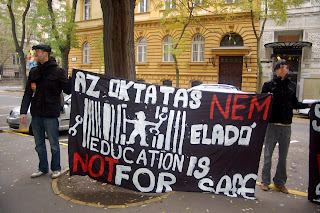 Two major reasons were the following:

– Solidarity with Austrian students who occupied the universities to protest against fees increase and discrimination. The date, 17 November, was chosen due to the fact that 9-18 November are the Global Week of Action "Education is not for Sale". During this week a number of solidarity actions, demonstrations and blockades of the universities were taking place all around the world, from US to Bangladesh.

– Solidarity with squatters from Vienna who were evicted on 12 October from the newly squatted building in Vienna that was supposed to become a new social center.

During the speech some people were going out and in the embassy, and we were asking them to take the letters to the ambassador. At last one person agreed to call some official representative who could take the letters. At the very end of the speech, the door opened and two people went out. The person who was an official representative was friendly, and listened to the reasons for us being there with interest. Then he took the letters and promised to give them to the ambassador. 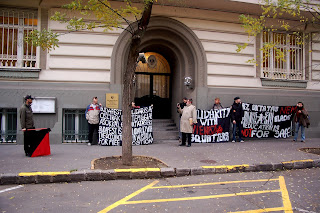 After this each of us expressed our reasons of being present at the demonstration. The major reason was, apparently, solidarity with Austrian students and squatters. Unfortunately, we were not allowed to leave the transparencies at the embassy or on the trees in front of it. Therefore we took them with us and brought to the university of Fine Arts where an informal lecture on student occupations and demonstrations is planned on 18 November – the last day of the action week.

This entry was posted in Unterstützen. Bookmark the permalink.